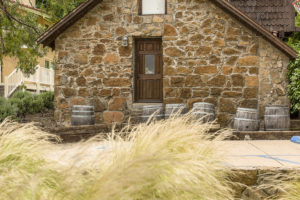 The property sits just off the scenic Silverado Trail. Before the Napa Valley became world renowned for growing grapes and making world class wines, the Valley was a prosperous mining area. The covered wagons traveled the Trial and early settlers lived in mining camps which have disappeared and helped lay the foundation for cities like Calisoga, Napa and St. Helena.

When he stayed in Calistoga in 1880 for health reasons, Robert Louis Stevenson, the author of numerous books including Strange Case is Dr. Jekell and Mr. Hyde and Tresure Island penned the infamous phrase “Wine is Bottled Poetry.”

The phrase graces two signs that visitors love to visit for photos. The words are even more meaningful when one considers that they were penned by a successful poet and author. What greater compliment could he utter?

Stevenson came to that conclusion after visiting two of the Napa Valley’s first vineyards- one of which is now Schramsberg. He describes his experiences in a memoir, Silverado Squatters. It is wonderful to learn about the area’s evolution and to realize that Stevenson would have passed by the Vignoble Estate during his stay.

About the same time, squatters or possibly early land owners built a cave in the along the back property line. It is situated in a natural crevice and would have been a good place to sleep in winter. It is near a naturally occurring stream during rainfall and has a hole in the ceiling to let smoke out from a fire. It was probably also used for storing alcohol during prohibition.

An early structure was built on the estate and eventually the roof was raised and a sleeping loft was added. The simple stone cottage still exists and its charm will be restored and is planned to be used as a pool house.

The property evolved and eventually became known as the Oliver House Bed and Breakfast. The property still features an olive grove and produces olive oil annually.

The current owner purchased the property in 2011 and completed a full upgrade to all aspects of the estate.

The name Vignoble translates in French to mean vineyard. Although the property doesn’t currently have any grape vines, it is situated among some of the finest wineries in the Napa Valley.

Nearby Mount Saint Helena is one of the few mountains in the San Francisco Bay Area to receive any snowfall during the winter. The headwaters of the Napa River are on the southeast slope of Mount Saint Helena. Mount Saint Helena had an explosive history of pyroclastic flows that resulted in The Petrified Forest. It also deposited thousands of pieces of obsidian, a dark black volcanic glass formed when felsic lava extruded from a volcano cools rapidly with minimal crystal growth across the Vignoble property.